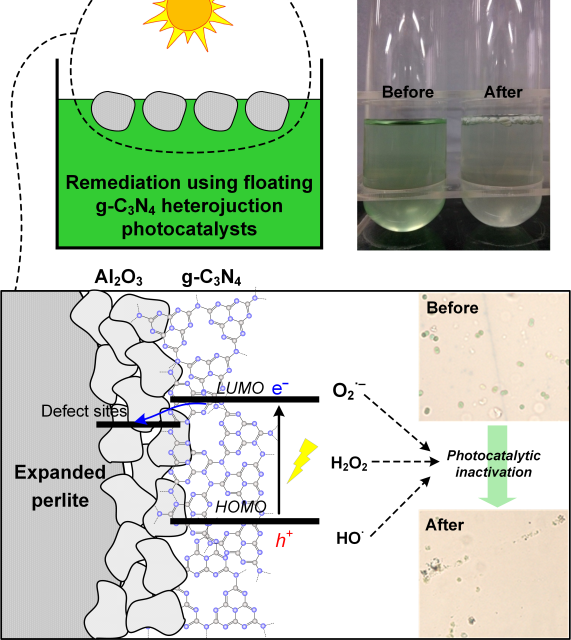 Title:  Visible-light-driven in situ inactivation of Microcystis aeruginosa with the use of floating g-C3N4  eterojunction photocatalyst: Performance, mechanisms and implications
Abstract:  The frequent cyanobacterial harmful algal blooms (cyano-HABs) occurring in aquatic ecosystems pose a threat to human and animal health. In this study, a novel floating, visible-light-driven catalyst was prepared by  depositing g-C3N4 on a composite expanded perlite (i.e., EP/Al2O3) via a facile impregnation-calcination method for the photocatalytic inactivation of Microcystis aeruginosa. Consideration has been given to the influence of different dosages of g-C3N4 precursors with the synthesized photocatalysts characterized using XRD, N2 adsorption/ desorption, electron microscopy, FT-IR spectra, XPS and UV–vis absorption spectra. Results of this study show that sheet-like g-C3N4 were well dispersed on the surface of EP/Al2O3 with the heterojunction photocatalyst (CAE-2) with a dicyandiamide to EP/Al2O3 ratio of 2:1 demonstrating the highest specific surface areas (i.e., 56.7 m2/g). Under 6 h of irradiation, 74.4% of M. aeruginosa at an initial concentration of 2.7 × 106 cells/mL could be removed with the use of CAE-2 of 2 g/L. In the photocatalytic inactivation process, algae cell lysis is mainly ascribed to the attack by the reactive oxygen species (ROSs) generated on the semiconductor surface, with the predominant species (i.e., HO%) causing the damage of membrane permeability with cations and cellular organic matters released into the solution though the cellular organic matters including microcystin-LR could readily be removed by the photocatalysts. Continuous monitoring by using flow cytometry and measuring the maximum photochemical efficiency of PSII indicated that cell apoptosis and reduction of photosynthetic activity occurred as a result of the inactivation. This study presents a promising technology for the remediation of cyano-HABs in open waters. 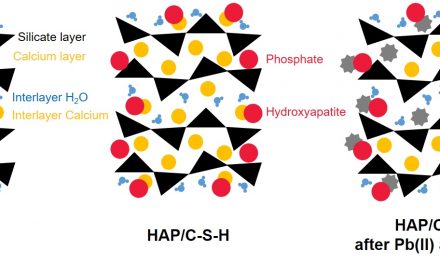 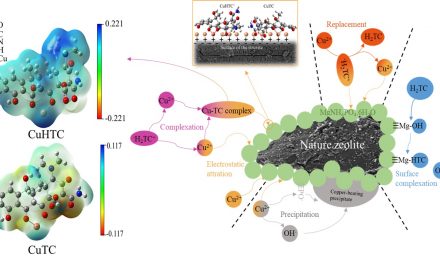 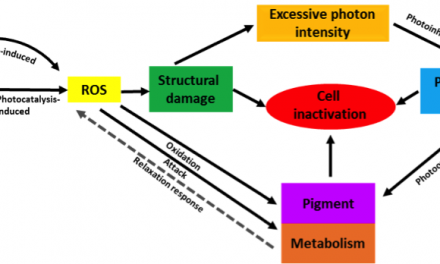 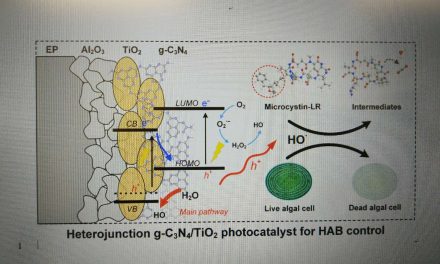 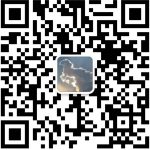